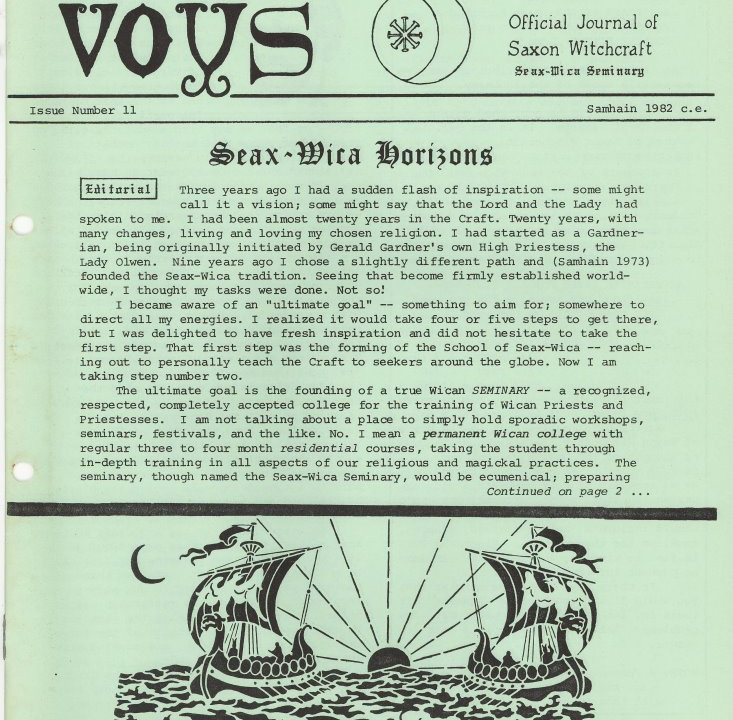 Development of the Seax-Wica College online

In Samhain 1982 (North Hemisphere), in the last number of Seax-Wica Voys – Issue Number 11, Raymond Buckland declared his dream to found a TRUE SEMINARY of the Seax-Wica, recognized, respected, completely accepted college for training of Wican (Priests and Priestess).

The original idea is based a develop a permanent Wican College with regular three to four months residential courses, taking the student through in-depth training in all aspects of our religion and magickal practices.

On february 6, 2014, Raymond Buckland said me about his project:

“Unfortunately the founding of a true Seax-Wica College just wasn’t to be. I would have loved to have done it but didn’t have enough (1) time (2) money. Then my situation changed and I just had to abandon the idea. In love and light.Ray-B”

I propossed Buckland the following idea:

About the idea of the Seax-Wica College, let me say you a proposal or idea that I have.  I generated a new method to apply in Lima and I did it on September 2013. On saturday, the project finished and I reached see that the new method is functional and run good in each one. Let me tell you a short resume of this method:

The problematic that one can find in the people who want to know Wicca.

1- People do not difference what is Wicca of the general form to understand Witchcraft (under the common christian understanding).

2- The understanding about the concept of God/Gods/The Divine. People believe (not “belief”) that Gods are phisical super-persons who someday they come back to this world and all can touch them and they communicate with the people and calling them.

3- If Magic is only a illusion or something real.

4- Where is the basis of Wicca.

1- The speech need to explain that “Wicca” is only an ancient word re taken to put a name a new “movement” to bring back some beliefs, philosophy and thoughts forbidden by the Jew-Christian-Muslim Western World. In this point, Wicca was used to identify the Witch Cult Practice System proposed by Gerald Gardner after his death. With it, others persons who practice other system or folkloric form of witchcraft adopt the name as well because it is in old english and had not a “patent”. A system of witchcraft who adopted the name “Wicca” in the label of their system, do not necessarily is equal or similar in the organic structure, rites or philosophy of other Wicca system; each founder or group, rescue the most important features that they want in your own system and practice. The Seax-Wica is based in the experience of a Gardnerian who saw some problems in the “Wicca System of Gardner” in the practice and decided perform a reform. In the practical system of Gardner there more elements of ceremonial magic that is most influenced in Kabbalah and some criterions of the “jew-christian” thoughts, was not pagan in the broad form; in Seax-Wica those elements was removed and the theorical basis to the devotion and magic practice is under the sympathetic magic. The rites written in The Tree have similarities in the structure of the Book of Shadows of the Gardnerian system, but the rites was written by Buckland, and in a form of poems hides a message in the recite of the psalms, and it can not be changed because one can lose the meaning of the message of the founder wanted to give. One can change the names of the Gods, because are labels, always that the name that one chose belong to the saxon pantheon. Do that do not change the sense of the ritual and the lesson of the passage. The practitioner of Seax-Wica can create new psalms or chants, music lyrics and rites, but respecting the basis of the rites of The Tree, one can add but do not remove the original rites. All the essence of the Seax-Wica born in the own inspiration of the founder and that is the way that one need to flow. The Founder based his own creation in the same criterion that Gardner did, when he modified the Book of Shadows of New Forest Coven, in some form Gardner reformed the tradition that he got.

2- The people need to understand that the idea of God/Gods/The Divine are a human mentalization done in the first times. The human in the first times in different places, needed answers to explain how they are in the world. They created stories with some characters but without some supreme presence over them. The human nature in those times, are based in the law of the most strong, and the sucesion of leadership were brutal inner wars. In one moment in the thousands years, in different places a most powerful human, the leader of the community, stopped and thought, how preserve his own lineage and tribe over all political events?, and in that moment each one decided take all the stories and to reflex in those stories, the political situation that they lived and created the figure of a some group of super entities who passed for the same situation and how they solved their problems to live in peace and joy. In all mythology, then the creation of the universe and the world, there a conflict between gods. Those powerful humans ( man or woman ) created these gods based in their own idiosyncrasy, with some characteristics based in their own beliefs, but they were designed with some virtues to represent a paradigm to follow as the best condition to goal the equality and the logical ordenance. Then created the evil gods who reflected the defects of the humankind in those moments, the vicious of the passion and bad feelings (envy, hate, jelous, ambicious). In this moment they have a polarity of the good and the bad, the first rules that the powerful human can apply in oneself and in each person in his community and during in the time. This moment was as the creation of a Constitution in a divine order, as the Bill of Rights. The theogony and the cosmogony set a rules to guide the humans a stay together and respecting one to another. In the time, based in these points and basing in the Jungian concepts, we stay in a archetypical stage that was landing in a egregoric form, feeded by the collective mind. The sympathetic effect, is reflected in the mind waves who arrive in an “astral plane” and connect by syntony or synchronization with this mental thoughts called Gods and they in consecuence, bring back some gift by channelization. The gods exist ? .. Yes, in other form and in other nature, created by humans and are our watchers who one choose to follow to get their virtues and bring “the good” to our own communities. (This proposal is based in anthopological and science politics arguments with the new form of interpretation by theologist scholarship under the exegesis view )

3- Magic is the name to a form of science which work with material things, feelings projection and mental focus. All this aspect born in the mystical experience. The mystical processes can transform our perception, granting us subtle abilities that we previously didn’t possess. Our empowered mind is thus capable of more possibilities than the ordinary mind.

4- The basis of Wicca, in Seax-Wica put a reference to Gerald Gardner as a start point to know who inspired this tradition. But the Gardnerian system had some influence based in the Thelema, Rosacrucians, Theosofism, Kabbalah and Martinism, in other words in the western initiatory systems. Seax-Wica only share some criterions or our proposal have similarities in other initiatory schools but in it is new in all sense.

Having these solutions, I did the system in the following form (the proposal):

I- Perform two expositions divided in :

– The Wicca concept and context.

– The list of Traditions who adopted the name “Wicca”.

– What do Wiccans do

– What is the Sabbaths and Esbats

– What is Traditional Wicca and Seax-Wica: Differences and Similarities.

– How are the other forms to practice witchcraft in the others traditions who adopted the word Wicca.

(This part I think to convert in e-learning of nine short videos, which have a quiz in the end of the lesson, if they answer good, pass to the next video. Only who present in the answers the tendency to be a Seax-Wica [ in this case if put in the theology that enjoy the german-norse pantheon, indeed is electable to Seax-Wica] they pass to a other stage that introduce them to the Seminary of Seax-Wica on line.

II – Seminary of the Seax-Wica On-Line. Is very easy to produce the mystical processes in a person, and that is based in 4 aspects:

A- The knowledge and the acceptation of the new perception in our conscious mind. The theory is all the main column in our process.

B- Before the self-dedication, the instruction on-line begin with a guidance, based in “Wicca for Life” book, trying to guide the person to adapt in the process, the time of this stage consist in obtain some elements to his own altar. But the Altar need to be small and portable. When he or she got all the elements, more of them handmade by theirselves, the time to reflect about the path is finally completed when they read and understand under the basis of the lessons in the expositions, the meaning of each god in the saxon (german-norse) pantheon, the attributes and virtues of the gods and how they teach us in the myths stories.

C- The experience through the practice in this case the ortopraxis following without change The Tree during three years. An acceptable time to interiorize the message of the tradition. In this time nobody can practice magic except lucnunga. Indeed, when the Ceorl, perform the self-dedication is a Gesith in all form, but the instruction begin after it. On-line only we support as advisors in this stage.

D- The Seminary end with the preparation of the Gesith to decide if want to set a Coven or continue his path in Solitary. He or She can develop the rites and the mystical processes in the theory, philosophy or magic arts. That moment, the Gesith take a compromise to support other new theows who want to follow the path and perform a work similar than he or she received in their own cities/countries. With it we can develop and spread the tradition having always volunteers who help other in this path.

What do you think about this proposal?”

Blessings in love and light, Juan
On february 24, 2014 Raymond Buckland answered:
“I think it is a wonderful proposal, Juan. You seem to have covered all the most important points. I see no reason why it should not be a great success and I most certainly hope so. You certainly have my blessing on this. I regret that I no longer have the time available to work on such a project myself but am very happy that there are people such as yourself who have the dedication to carry forward the Seax-Wica and to take it out to others who, we know, will appreciate it. Many, many thanks for all the effort you have put into this. May the Lord and the Lady walk beside you always. In love and light. Ray-B”
For that reason I set this website to be our cornerstone to become in this dream. To do it, we need financial support and hands to do it real.

Finally, this Seax-Wica College online will be free for everybody.